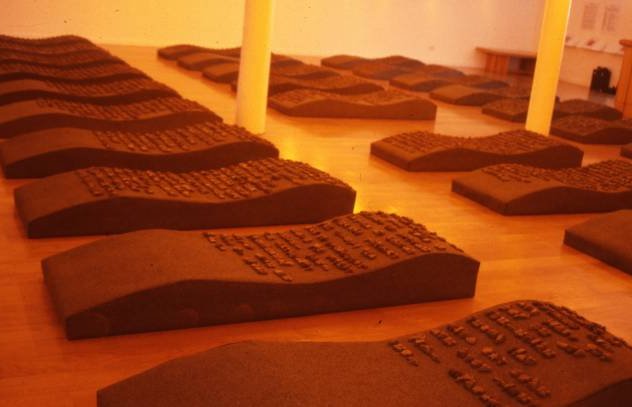 The physical Letters explores the inescapable irony of our attempts to explain the visually known through the written and spoken word.

Each letter of the alphabet is represented as a cast pictorial sculptural symbol. Hackett contacted an eclectic mix of names from the arts, politics, media and beyond, and asked them to nominate a passage of text or selection of words which they consider significant, or inspirational, in relation to the visually experienced or a specific vision, in a broader, more global sense.

Responses include sources ranging from Virginia Woolfe, Lao Tzu, and the Holy Bible to Andre Breton and T.S Eliot, as well as one off pieces of writing specially developed for the project by donors.Converted into the sculptural alphabet, each text is fixed onto an undulating platform covered in green slate roofing felt, reminiscent of a bed or reclining lounger, over which a single light bulb hangs. Seen individually the characters hold a playful and almost decorative quality. But viewed en masse, within a sombre linear format and on the functional base form, they become emblematic of a dislocated ward, dormitory or cemetery.