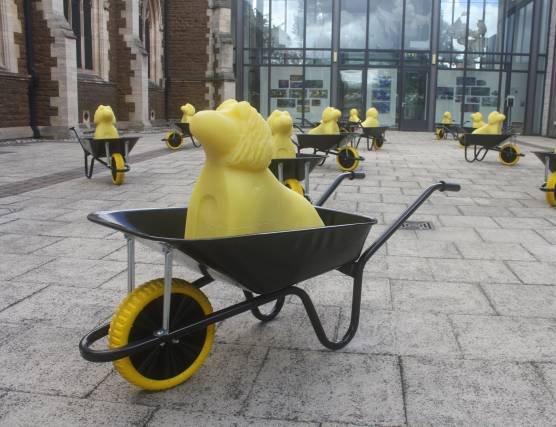 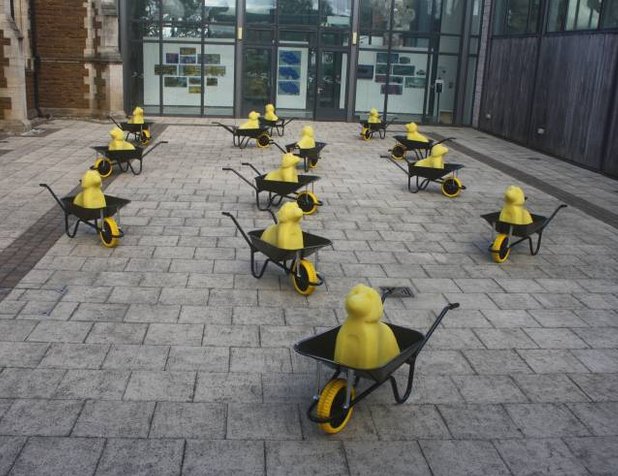 An installation of 13 wheelbarrows containing yellow silicone rubber dog forms sited in the courtyard at 20-21 Visual Arts Centre. ‘shaggy dog stories’ follows on from a series of  ‘artist’ walks using the wheelbarrow dog as a conversation trigger. During these walks Hackett has been collecting phrases and anecdotes from dog owners. These were assembled into a free artwork in the form of a tabloid newspaper ‘shaggy dog stories’, for visitors to take home and read. The text composition is tangential and fragmented rather than ‘straight’ journalism.

The dog forms are artificial in their coding, feeling designed and manufactured, and are an extension of Hackett’s on-going examination of the ‘futile purported paradox of the unique hand crafted versus the notion of the soulless repeated industrial form’. The combination of the actual readymade barrows and synthetic code of the ‘hand-made’ dog forms act in a sense as a foil for one another The use of form as conversation trigger builds on Hackett’s integration of collected text and dialogue into his projects. For him ‘the fact that social interaction takes place via a proxy form, is arguably of equal value as a process to the content of the dialogue itself’. The stories collected vary from the profound to the banal. As an artist he is intrigued by the notion of ‘common ground’ however tenuous as a basis for social togetherness in an oft messed up world. Hackett chooses to work with the everyday and commonplace to unearth and question many of the received truths that surround us. 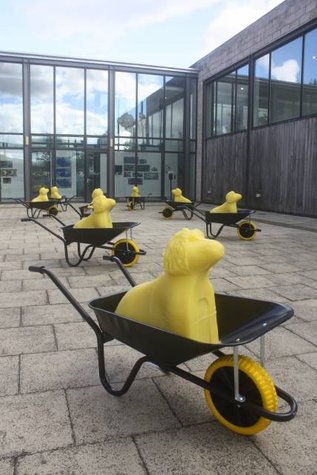 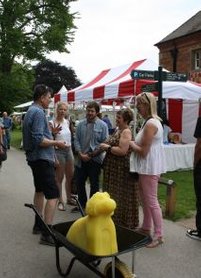 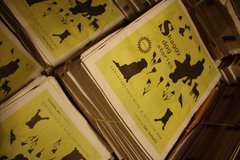